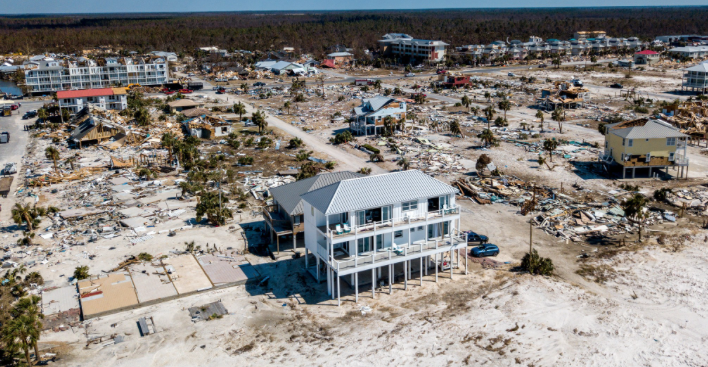 The “Sand Palace” a model of resilient architecture

It was easily the most noticeable house on the oceanfront of Mexico Beach, Florida…simply because it was still standing.

On October 10, 2018, Mexico Beach was flattened by Hurricane Michael and amongst the devastating destruction, one home stood upright on stilts above all the apocalyptic destruction, appearing largely unscathed and shining majestically in the sun.

The home, known as the “Sand Palace”, would garner the attention of countless national and local media outlets fascinated by its story of incredible resilience faced with such a powerful destructive force.  The New York Times, CNN, Weather Network, Fox News and several others all clamored to find out why the three-story, four-bedroom, 4½ bath vacation rental was able to withstand the sustained 155 miles per hour winds that wreaked havoc on all that surrounded it.  And what they found according to its owners, Dr. Lebron Lackey and his uncle, Russell King, was that the home was specifically designed to do just that – survive “the big one”.

“At every point, from pilings to the roof and everything in between, when it came time to make a decision about what level of material or what to use, we didn’t pay attention to code,” Dr. Lackey told CNN’s “News Day”. “We went above and beyond code, and we asked the question: ‘What would survive the big one?’ And we consistently tried to build it for that.”

Construction on their dream vacation home started in 2017 and ended one year later, and throughout the building process, the owners looked into every detail to ensure the house could withstand the worst storms hurricane-prone Florida would endure to have it survive for generations.

So what kind of devastation did the home survive? The New York Times published an analysis of aerial images showing a mile-long stretch of Mexico Beach where at least three-quarters of the buildings were damaged by Hurricane Michael (www.nytimes.com/interactive/2018/10/12/us/mexico-beach-fl-damage-map.html).  The images show the extent of the damage along the 1.2-mile stretch of the town where 237 of the 440 buildings they could identify, or 54 percent, were destroyed and 99, or 23 percent, were severely damaged with almost all of them being homes.

State code in the wake of Hurricane Andrew in 1992 required that houses have to be built to withstand 120 mph winds. However, the Sand Palace was built to withstand about 240 to 250 mph winds as well as being elevated on tall pilings to allow a storm surge to pass underneath with little damage, Dr. Lackey explained.

So how does one build a house able to resist Mother Nature’s Category 5 monster winds?  According to Lackey, he and his uncle chose to fortify their beachside home by building with the most resistant materials available, including NUDURA insulated concrete forms, or ICFs.

“In building our home, we wanted the durability and resiliency of a home that could take a hurricane.  When it came to walls, we wanted walls durable enough to take huge winds, and we went with ICF, specifically NUDURA,” he said.

“ICFs are an efficient alternative to conventional wood framing techniques that are solving major storm issues like what we saw in the case of the “Sand Palace” home during Hurricane Michael,” explained Keven Rector at NUDURA, a leader in the insulated concrete forms industry.

ICFs are designed to stay in place as a permanent part of the wall assembly. They have the advantages of concrete wall construction, and similarly, they can withstand extreme weather conditions such as strong winds, seismic forces, hurricanes, and tornados. With this latest storm, ICFs have proven once again to be one of the strongest and energy-efficient wall systems used in residential and commercial construction.

Dr. Lackey agrees: “I would encourage anyone to consider this construction method and factor NUDURA ICFs into their decision before they start a new build.”

As the planet is getting warmer and the storms are getting stronger.  Homeowners looking to build or rebuild on the coasts have to be prepared and consider the benefits and proven advantages of ICF construction.